The Chapel
Support Us 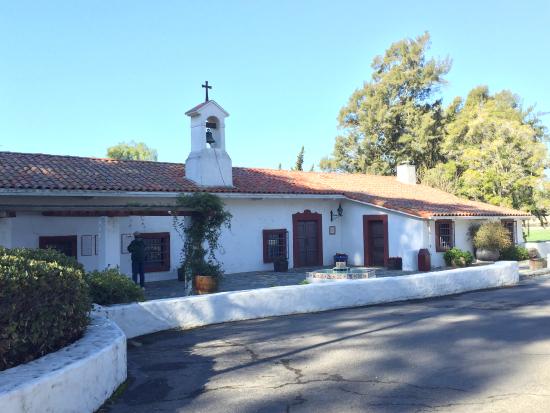 The Ranch House Chapel is the oldest structure on Camp Pendleton. It was originally built around 1808 and served as temporary quarters for the Pío Pico family until the Ranch House quarters were ready for them to move into in 1828. The temporary quarters then became a winery until the grapes failed many years later. In what is now the airfield, vineyards grew and were harvested as late as the turn of the century.

The building became a tool shed and under the O'Neills' ownership, it became the living quarters for the blacksmith who had his shop in an adjoining building.

In 1943, the Marines undertook the restoration of the old adobe building, incorporating it into the present structure. Originally planned as a museum, the building finally became a chapel, principally for use by Marine Corps Women Reservists. As of November 15, 1943, there was still no chapel on the base, although 32,000 servicemen were stationed there. Almost $9,000 was donated by the various Hollywood studios toward the work needed to create the Chapel.

During the restoration of the adobe, actor Anthony Quinn was on base for the filming of "Guadalcanal Diary". He donated many antiques from his collection, some of which were originally from the John Barrymore estate.

The large crucifix was rescued from an old California mission (Santa Barbara) when the building collapsed after an earthquake. It was used in the Ranch House for many years during the tenancy of Don Juan Forster.

Among the artifacts and religious objects found in the Chapel are an early 18th Century Italian solid silver monstrance, a 1786 English chalice, and an 18th-century Peruvian missal stand.

The large chair is a replica of one used by King Carlos of Spain. The old vestments on display in the sacristy were apparently salvaged during the time of pillaging. The old chasuble, maniple, and burse are thought to date before 1832 and may have been used here or at San Luis Rey Mission. The altar cross of gilded wood stands approximately two feet high and was originally used by Franciscan Friars of Peru in the 17th and 18th centuries.

Candles were used before the Chapel was wired for electricity.

The stained glass windows, replicas of famous cathedral windows, are made of Canterbury glass and contribute to the popularity of the Chapel for weddings. Most were donated by descendants of the former ranch owners and cost, at that time, only $250 each.

The Mexican Folk Retablo, an oil painting on tin, is of Nuestra Senora de Merced (Our Lady of Mercy), appearing in her role as protectress holding the child. It was donated by the Docents in 1995 in memory of four-year-old Karissa Renee Carver, daughter of GySgt Ruth Carver.

In 1993, the Santa Margarita River flooded and tore through the two side walls of the Chapel, sending the stained glass windows downstream and devastating the Chapel. Through the generosity of many donors and the Friends of the Ranch House Chapel, sponsored by SOHO, over $28,000 was collected for the restoration of the Chapel and its artifacts, and to replace much of the art that was destroyed. Dedicated volunteers, Marines and Base Facilities staff worked long hours to recover pews, windows, ceremonial furnishings and art from the deep mud and then to rebuild the Chapel as we see it today.

Only the window depicting St. George was never found. It was replaced at a cost of $6,000.

Outside the Chapel, embedded into the courtyard entrance, is the stone doorstep from the Assistencia Mission at Las Flores. The bell on the Chapel came from the San Juan Capistrano railroad station where it hung for many years, having been placed there from the Asistencia at Las Flores by the Forster family. The iron cross on top of the bell tower was a donation from John Baumgartner, Jr.